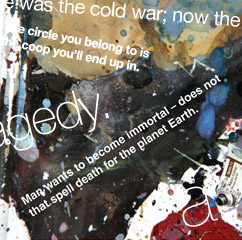 The circle you belong to is the coop you’ll end up in.

Understand the solitude of those who live within you and you’ll be a human being.

I can’t be touched – least of all by those who can’t hurt me.

There’s nowhere we can reach as long as we all want to be in the same place.

Feel good in your own skin, under it the years decide.

Don’t be forever shooting at me, some of your bullets are blanks.

Everyone dreams their own life’s dream, reality is life beyond the grave.

Tread somewhere else, the truth lies beneath your feet.

Step by step, foot by foot.

Depending on myself, I depend on others.

Men went to Mars. The Martians said, ‘What robots!’

Men live penned in prison, animals at liberty in zoos.

History repeats itself, its authors the victors.

Nothing at once, everything in the meantime.

Change your tense. Use the future if things don’t go right in the present.

You’re the same as your neighbour, but the converse could also be said.

Humanise the success that means everything in life.

To read that you know better than I do, I’d have to be literate.

We’ll be equal before the law when the judges are too.

One page of love, several novels of life.

We’ll become what we are.

No one is last as long as love at first sight exists.

As long as you’re pacific, you’re the greatest ocean.

Of nine chances, we’re the tenth.

Ruler, is the middle class content? The upper class will never be.

Three kinds of slave: the slave to power, the wage slave and the credit slave.

Distance yourself from yourself, you’re close to evil.

Sure of yourself, sovereign everywhere.

I stand the way my affairs stand.

The world’s become tragicomic, nobody laughs outright without a tragedy.

You’re my first love; at the start I was the last to be first.

After the first comes the average.

As long as there was capitalism and communism there was the cold war; now the world’s in flames.

Better days are coming, so man will be even worse.

The nation and nationalities will be richer, everyone working on his own account.

The tax we pay from birth is life, the interest our years.

Talk openly but in an open space – words eco.

The difference between profit and profiteers: profit is divided, profiteers multiply.

Punishment is most often revenge, but when punishment errs it dreams of pardon.

I’ve a feeling I’ve seen you somewhere! Yes, don’t you have a feeling you need me for something?

I stand the way my affairs stand.

Everything depends on the election, who will pay for it?

The younger generation likes autumn, it sees the older as a deciduous forest.

Don’t miss the moment if your future’s in it.

Of all consequences, the first is the longest.

The actress understood too late, to be a fashionable success she should be naked.

Spring’s arrived, the flowers are in bloom, but no one’s taken a sniff at me.

Of all womankind, the motherland weeps most honestly.

I say the same thing all the time, in this I differ from others.

Be in touch with your soul, the body’s fickle.

Judging from my instinct, they’re right to call me an animal.

I’m always the first to do wrong, that’s why I’m so experienced.

Either be it, or stop going on about what you want to be.

Why shouldn’t I gossip about my friends? My enemies know in advance what I’ll say about them. He who is born with everything he needs has no need of himself.

Whoever wants to rule should be a realist, the female sphere is not amenable to that.

I’ve no need of a visa, my friendship has no frontiers.

Think freely about freedom of thought.

The glass in your hand is fragile, the water in it heavy.

Why so many smiling politicians when they persuade us we’re living in difficult times?

I was sacked, I’d no electricity, my child had neither bread nor milk. The first snow fell! I went out for a walk boiling inside.

The wise man counsels the foolish as long as he doesn’t trust him – then he laughs at him.

As long as your chances are sinking, you swim well.

Between the frontier and the marriage bed there’s a foreigner.

According to the statistics, crime has decreased – but just wait till the next election.

In childhood death is an illusion, in middle age a reality, and in old age an everyday occurrence.

The easiest woman is the inquisitive one, she’ll give herself to convince herself.

In life we either weep or laugh – the rest is the daily round.

When everything’s in motion, it’s hard to escape being trodden on.

The bad novel became a drama, all the characters started to ham it up.

After the good times comes reality.

When a rich man swims in a sea of cash, he thinks it’s an ocean.

If you’ve decided to go all the way, distance yourself.

Enough! - so that it doesn’t get boring.

When it’s certain the force that’s heading for you will win, face another way.

To live healthily, you should eat well - to live longer, eat less.

Judge the sublime, the rest is error-free.

If somebody serves you as a model, don’t undress in front of them.

Fill the mouth that constantly criticizes you, and the same mouth will shower you with praise.

Swim in the sea of love; later you’ll start to drown in it.

What would Tutankhamen’s attitude to silence be, when nowadays every ‘pharaoh’ has his own spokesman?

How to prevent the inevitable, when it’s a part of what’s to follow?

Line up in order, I want to set you right.

I’m in form, my wallet’s shaking.

I am the avantgarde, I trample all before me.

The price goes up when we are paying, and falls when others do so for us.

Who’s more in the right: he who usurps another’s right, or he who wants to keep the right for himself?

Don’t limit the movement of those who follow you.

Write down what you said, but use fewer words.

Seize the moment when you’re in fashion, for fashion’s moment doesn’t last long.

Don’t irritate the mouth whose tongue expresses itself crudely.

Have we ever asked ourselves what happens behind the man who always wants to be in the foreground?

What do cows think of silicone breasts?

Finally the tastes of artists and consumers have coincided - paint and consume a Big Mac, Coca Cola or spaghetti.

I’m in a fix: should I take the queen, or checkmate the king?

Why shouldn’t I sell myself, if someone’s prepared to pay more than I’m worth?

No one is as young as his years, or as old as the years life has given him.

What is the evolution of the line of least resistance when the whistle blows for an outsider, and when it blows for the favourite?

We say that there’s nothing in space - that means there’s no space.

A king’s crowning success is his queen, the queen’s when both crowns are united on her head.

Today a person no longer knows whether the world has become civilised or militarised.

The end of all illusions - I’ve hit reality by mistake.

What should one’s attitude be when someone has done something for someone else and the benefit is mutual?

What would a novel look like with the first and the last pages blank?

Is there an ordinal number for the consequences of a wrong decision?

I’ve reached the peak of the pyramid, what’s the next point?

When you’re on the list of undesirables, the only consolation is that if they scored you out they might mark your name with a cross.

It’s a full moon tonight, should I think of sex or my wages?

Producers of the world, distribute yourselves!

Decide what your future route will be - the path you follow every day, or the road you should set out on?

Write down what you said, but use fewer words.

After Mt. Everest the next peak is Mars.

Does anyone know where the epicentre of a shaky marriage bed lies?

Money is a trial - spending deliveres the verdict.

Everything happens quickly - except in sex.