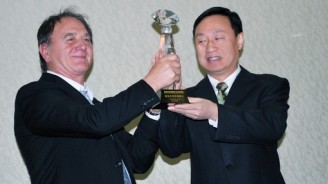 “Two Times”, a documentary inspired by the African wilderness, written and directed by the Macedonian artist and director Kiro Urdin won the Giant Panda Grand Prize at this year’s 6th edition of the International Animal and Nature Film Festival, which took place in Ya’an, China.

The international jury chose to award the film among 43 domestic and foreign film entries under the theme of enviromental protection, competing in 3 categories. The film was shot on locations in Masai Mara, Kenya.

This is a second time a Kiro Urdin film takes part at the festival, following his last year’s entry “Fire and Water”.